been recovered by police detectives sixteen days after they were strangled to death by two Hausa security guards in Akure, the Ondo state capital. 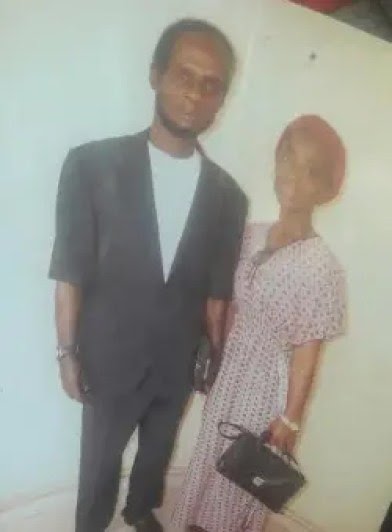 The deceased daughter was due for her NYSC in July this year.
Parading the deceased security guards are the police headquarters in Akure, the state police commissioner Undie Adie said they have confessed killing the father and daughter under the influence of tramadol and other dangerous drugs.
The gruesome murder of the father and daughter took place at Ojomo Akintan Estate, Olu FOAM Ilesha/Owo expressway, Akure, Ondo State
In an interview, the suspects Ayuba Idris aged 20 who was arrested in Kano State where he fled to after the crime and Taisu Abubakar aged 23 also arrested in Sokoto State confessed that they murdered the daughter first before descending on the father.
” We took tramadol and Indian hemp that night at about 8pm and we invited the daughter to come and see who was at the gate.
” When she came down we used wire to strangle her. She shouted and this attracted her father who came running to the scene. We then descended on the father who fell inside the gutter and we killed him there.
” We later hide their corpses under the staircase in the estate and fled with some of their belongings.
Briefing newsmen, the police commissioner Undie Adie said “On the 2nd of May, 2019, at about 0830hrs one Mr. Ojo Adegbusuyi ‘m’ of km 31, Ilesha/Owo expressway, Akure reported that one Kwakye Kwaku Richard ‘m’, aged 71 years and one Kwakye Tope ‘f’ Aged 27 years daughter of Mr. Richard with their two Hausa Security guards were missing from their residents at Ojomo Akintan Estate, Olu FOAM Ilesha/Owo expressway Akure, Ondo State and that all effort to trace their whereabouts proved abortive.
“On receipt of this report, detectives from this Command swung into action and one Ayuba Idris ‘m’ Aged 20 years that happened to be one of their security guards was arrested in Kano State on 16th May, 2019.
“The handset of the missing person and his suits were recovered from him.
“Upon interrogation, he confess
Related Topics:crimeNews
Up Next