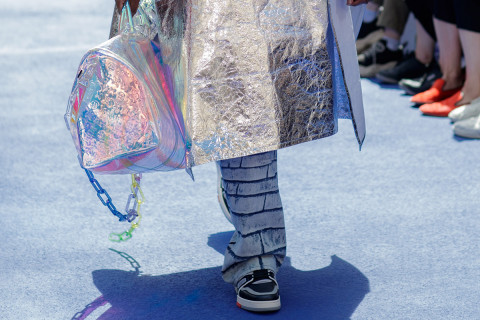 Highsnobiety / Eva Al Desnudo
When Virgil Abloh was appointed artistic director of Louis Vuitton men’s, it was a given that he would implement major changes. In fact, Louis Vuitton’s next season is rumored to be inspired by Michael Jackson, which couldn’t be further from former artistic director Kim Jones’ travel-inspired looks.
Abloh’s debut LV show was defined by an unabated use of color, confirming a departure from Louis Vuitton’s more muted — think classic brown leather — palette and into something more adjacent to streetwear’s bright repertoire.
In his show notes, Abloh included a list of vocabulary with his own definitions. Under “R,” the designer defined “rainbow” as “a kaleidoscopic palette evolving from off-white to polychromatic, synchronously forming a holograph archway known to represent a dream.”
A bit verbose, perhaps, but what Abloh was getting at was that holographic and varicolored materials are the future and a natural progression for contemporary fashion design. To nail home the sentiment, Playboi Carti closed the show in a silvery foiled cape and an iridescent version of LV’s classic Keepall bag. 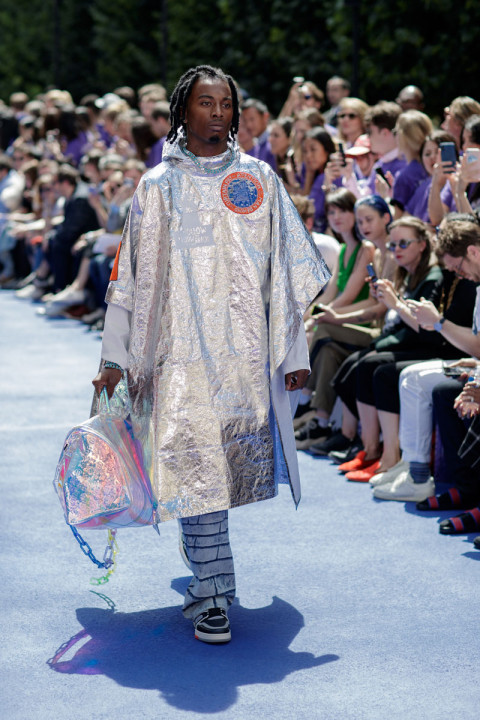 It was one of the key items in the SS19 collection and one that’s likely to catch some serious heat once it drops next year. The Keepall first appeared in 1930, and Abloh’s contemporary interpretation features LV monogram-embossed plastic, an oil-slick finish, and a transparent plastic chain. Abloh has been taking the bag to panel talks, airports, and his latest post on Instagram even procured a comment from Paris Hilton: “I need that bag in my life.”
Reflective and holographic materials showed up across the board this year, notably at Stone Island and New York City label Sies Marjan, which proffered its Multicolor Reflective Blaine Raglan Coat, a piece that appears as a satin-y purple/blue in natural light and as an electrified rainbow under a flash.
The fact that holographic and reflective materials are trending at a time when clothes are bought with an emphasis on being photographed and flexed on Instagram is no coincidence, so in that sense, they’re perfect for 2018 and beyond.
The “beyond” here has actually been a focal point for many labels this year, as designers have leaned into ideas of futurism for inspiration, and each has interpreted the future of fashion differently. Men’s fashion week back in June showed us dystopian utility via 1017 ALYX 9SM, disturbing alien hybrids such as the designs at Xander Zhou‘s SS19 show, or, more recently, the pearlescent, multi-colored metallic sheen of Dior’s Pre-fall 19collection which showed in Tokyo last month.
Similar to Dior, which showed classic items with modern modifications, Louis Vuitton’s holdall from SS19 is matching an iconic shape with contemporary materials, and making the familiar feel brand new, and a lot more photogenic. 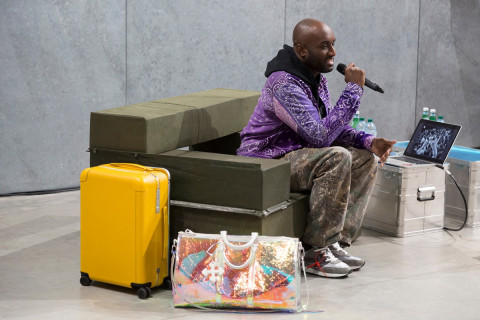 Don’t be surprised, then, if the iridescent Louis Vuitton Keepall is the accessory of Summer 2019.
What do you think? Will Abloh’s Louis Vuitton debut catch on and would you flex the transparent holdall? Sound off in the comments.
Related Topics:FashionLouis VittonVirgil Abloh
Up Next