A 24-year-old Iowa man made a jokey sign asking for beer money and ended up making a donation to a children’s hospital. 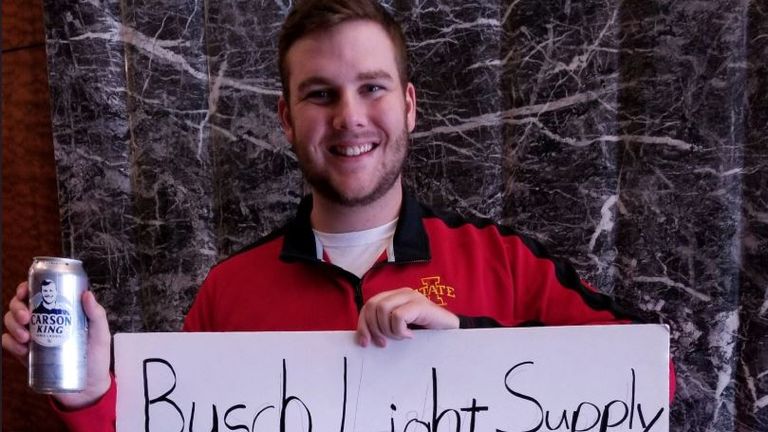 Image:Carson King poses with his personalised beer and the sign that started it all. Pic: Carson King

When American football fan Carson King cheekily held up a sign on TV asking for people to send him money to buy beer, he didn’t expect to receive a cent.
Now, just over a week on, he’s raised more than a $1m (£800,000) and is donating the funds to a children’s hospital.
“I was hoping to make a couple people laugh! I never expected to be on TV, and definitely did not except anyone to send any money,” he told Sky News.
Referencing a beer brand, Mr King’s sign read “Busch Light Supply Needs Replenished” and gave his username for mobile payment service Venmo. 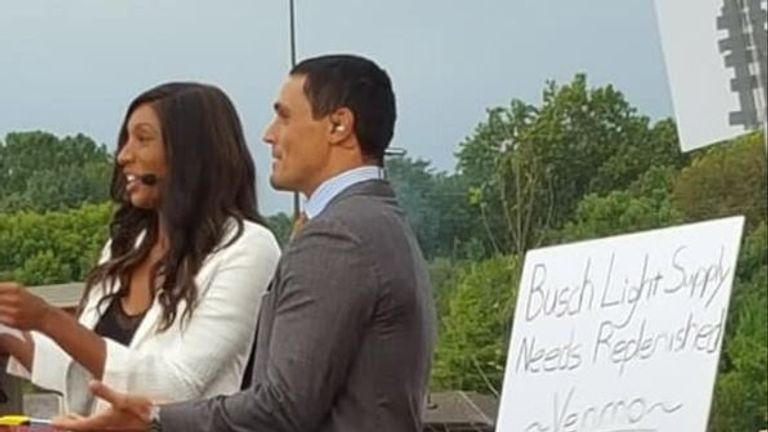 When cameras caught the sign on 14 September and broadcast it across America from the Iowa Hawkeyes and the Iowa State Cyclones game, viewers at home began to send him money.
When the cash flowing into his account hit $600 (£480), Mr King conferred with his family and tweeted after the game that he decided to donate all the proceeds (minus the cost of one case of beer) to University of Iowa Stead Family Children’s Hospital.
Mr King told Sky News: “I was hoping, best case scenario, someone in the crowd sees the sign, gets a laugh, and sends $20 for a case of Busch Light.
“To go from that to over $1.065million in total contributions – including matches from Busch and Venmo – is amazing. 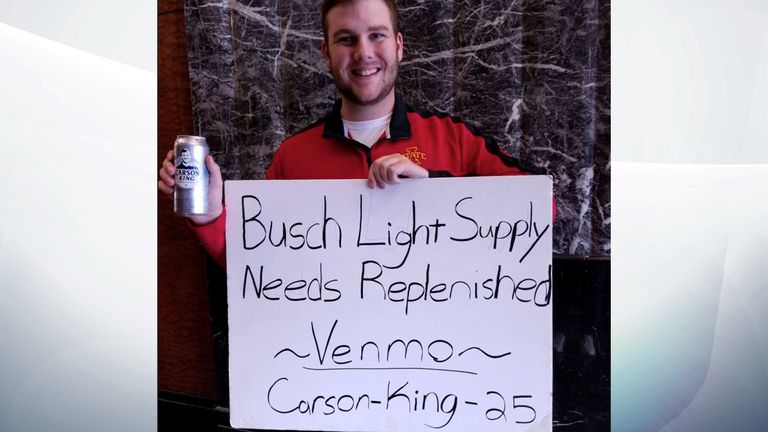 Image:Carson King poses with his sign and a beer with his face on. Pic: Carson King

“It just shows that once people hear about a good cause, they are willing to help.”
Mr King, who is going to accept donations until the end of the month, told Sky News he chose the family hospital “because they do amazing work for everyone in the state, and country for that matter, saving lives and giving hope to thousands of families”.
He said: “I just wanted to help in anyway I could.”
Both Venmo and Busch Light pledged to match the contributions, which meant Mr King’s total funds burst through the $1m barrier on Sunday.
On Monday, the Iowa State University fan tweeted: “I still can’t believe we hit a million dollars yesterday.. We’re sitting at over $1,065,000.00 in total contributions to @UIchildrens after @BuschBeer and @venmo match our contribution. #ForTheKids and we’re not done yet!”

Carson King@CarsonKing2
I still can’t believe we hit A Million Dollars yesterday.. We’re sitting at over $1,065,000.00 in total contributions to @UIchildrens after @BuschBeer and @venmo match our contribution. #ForTheKids and we’re not done yet!

418 people are talking about this
The children’s hospital, which overlooks the football stadium, replied to him on Twitter, saying: “It feels surreal to us, too! We can hardly believe what’s been accomplished in just over a week.”
It followed an earlier message from the hospital thanking people for their donations.
In recognition of Mr King’s actions, the beer company have offered the 24-year-old a year’s supply of beer and delivered bespoke cans designed to include a picture of his face, with his name and the words “Iowa legend” emblazoned across them.

The man, the myth, the #IowaLegendpic.twitter.com/TFPc52lllq

Reflecting on the whirlwind of events, Mr King said: “To go from a joke to raising this much for a great cause is great. It restores your faith in humanity.”
Source: Skynews
Related Topics:News
Up Next

After 12 Years Of Marriage, Nigerian Man Discovers Through DNA Test That 2 Out Of 3 Children Aren’t His