Connect with us
The security guard returned the money after a customer forgot it. 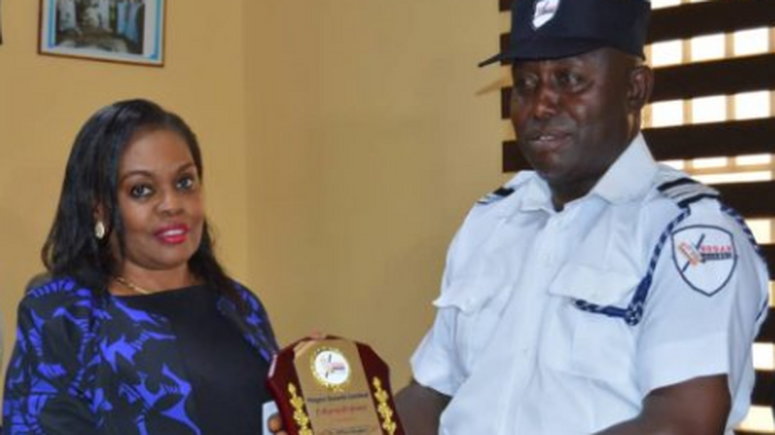 William Okogbue says his values helped him fight off the temptation to keep the money [TheCable]
William Okogbue, a security guard, has been rewarded by his company, Hogan Guards Limited, for returning the sum of $10,000 (N3.6 million) lost by an Ecobank customer.
While on duty at an Abuja branch of the bank in July, the 46-year-old found a bag in the banking hall and found $10,000 inside.
He said he took the bag to the toilet to count the money before he decided to hand it in to the bank’s customer service manager who later handed it back to the customer who came looking for his lost bag.
During a programme in Lagos on Thursday, August 23, 2019, Hogan rewarded Okogbue with a permanent appointment.
While speaking, Okogbue said he has worked in Ecobank for almost ten years and that he simply did what he was trained to do despite the temptation.
He said, “I am not rich but those values have been put in me. If I had taken the money, I will be in problem, Hogan Guard, Ecobank will also be in problem.
“When I picked the money, I took the money to the toilet, checked if it was real or fake. I said God, is this a temptation or what. I prayed to God.
“One part of me was telling me to take the money and run, another said I should return it. I was inside the toilet for almost one hour.
“Now, I have been given a letter of appointment as a full staff; Ecobank gave me a letter of recommendation. I feel good about it.”
He said he’s unconcerned by social media comments from people who said he should have kept the money, and advised others to not take what doesn’t belong to them.
Related Topics:News
Up Next