Croatia earthquake: People were told to avoid public areas, such as parks and public squares, but had no choice as they ran out of their apartments. Up to five people keeping distance are allowed to be together. 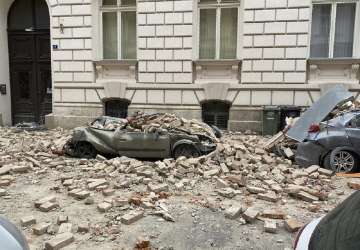 Image Source : AP
Strong earthquake measuring 5.3 on the Richter Scale struck Croatia and its capital on Sunday. The tremors caused widespread damage and panic, while some casualties were also reported. The European seismological agency, EMSC, said the earthquake struck a wide area north of the capital, Zagreb, at 6:23 a.m. (0523 GMT) Sunday. The epicenter was 7 kilometers (4 miles) north of Zagreb at the depth of 10 kilometers (6 miles).
Many buildings cracked in Zagreb and walls and rooftops were damaged. Downtown streets were littered with debris. Concrete slabs fell on cars and chimneys landed in front of entrances.
Inside homes, residents shared photos of belongings falling off shelves, broken bottles and glass. Officials said there were injuries, but gave no other immediate details.
The earthquake struck amid a partial lockdown of the capital because of the spread of the coronavirus.
People were told to avoid public areas, such as parks and public squares, but had no choice as they ran out of their apartments. Up to five people keeping distance are allowed to be together.
Zagreb’s iconic cathedral was also damaged with the top of one of its two spires collapsing. The cathedral was rebuilt after it toppled in the 1880 earthquake.
Power was cut as people ran out of their homes. Several fires were also reported. At least two other tremors were recorded later.
Related Topics:News
Up Next