The unnamed nurse, who claimed she was ‘too hot’ to wear her uniform and the PPE, was disciplined by hospital bosses in Tula, Russia, after working just underwear on a coronavirus ward 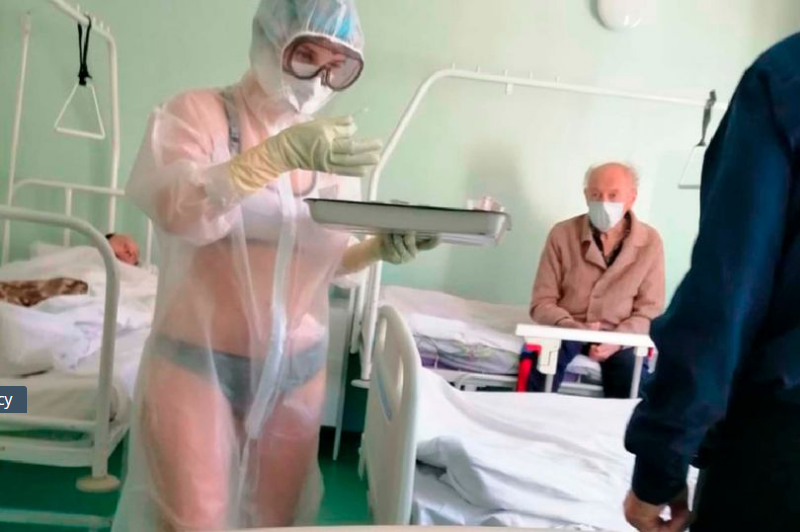 A nurse treating coronavirus patients has been photographed wearing just lingerie under her transparent PPE.
The unnamed Russian woman was working on a Covid-19 ward, treating only male patients, a a hospital in Tula.
The image quickly went viral, as she can be seen wearing matching black bra and knickers as she writes a patient’s chart.
But hospital chiefs were not amused and punished the nurse for “non-compliance with the requirements for medical clothing”.
The nurse, in her 20s said she was “too hot” wearing her nurses’ uniform under the gown.
She told her managers at Tula Regional Clinical Hospital that she did not realise the PPE she wore when treating coronavirus patients was so transparent.
The regional health ministry reported that “a disciplinary sanction was applied to the nurse of the infectious diseases department who violated (uniform) requirements”.
Her chiefs at first said the woman was wearing “lingerie” but later claimed she had a “swimming suit” beneath the gown.
The nurse has not spoken publicly on the incident and the exact details of the disciplinary action were not revealed.
One patient said there was no objection from men in the coronavirus ward while admitting there was “some embarrassment”
A reader of local newspaper Tula News congratulated the nurse.
“At least someone has a sense of humour in this gloomy, gloomy reality,” said Sergey Ratnikov.
“Why the reprimand?” asked Albert Kuzminov.
Another supporter said: “Everyone shouted at her, but no one paid attention that she was dressed in this way because of the heat.
“Maybe you need to yell at the management … because there is no normal air conditioning here.”
Marina Astakhova posted: “Well done, she raised the mood of the patients.”
While Valery Kapnin wrote: “Why punish the nurse, you need to reward her.
“Seeing this outfit, no-one wants to die.”
The incident came as the head of Russia’s Covid-19 monitoring centre, a former TV doctor, Alexander Myasnikov, shocked viewers with his blunt speaking on the coronavirus crisis.
“The infection will anyway take its toll,” he said.
“We will anyway all get sick. Those who were supposed to die will die.
By Tuesday, Russia had a total of 299,941 cases of infection, with an official death toll of 2,837.
Many experts believe the Russian statistics underscore the true level of fatalities.
Officially, Tula has had 2,637 infections with 19 deaths.
Related Topics:Trending
Up Next

Kante Has hair, Pogba is bald… Stars who look different after COVID-19 lockdown

Young  Banker drops note for his dad, girlfriend before committing suicide in Lagos