Tobechukwu “Tobi” Phillips graduates at the top of her class with a 6.9 cumulative GPA. 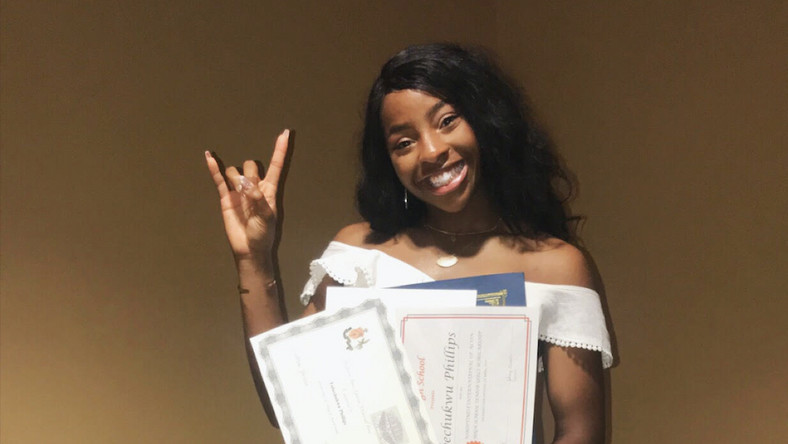 A Nigerian teenager named Tobechukwu “Tobi” Phillips has just made history at Alvin High School in Texas.
She did this by becoming the school’s first
Black valedictorian 125 years after it was established in 1894. This
incredible feat takes place 54 years after the school integrated with
African-American students in 1965.
According to an online platform called Because Of Them We Can, the school currently has 86 black students out of approximately 2,800 students.
Phillips graduates with a 6.9 cumulative GPA on a 4.0 scale, which she earned by taking AP courses along with her electives.

Tobechukwu “Tobi” Phillips graduates at the top of her class (becauseofthemwecan)

She got to the top of her class by getting all
A’s throughout her four years in school. This is in addition to her
other interests.
This exceptional teenager is also a Sunday
school teacher, a member of the Rho Kappa Honor Society, president of
the National Honor Society, an AP ambassador, a decorated volleyball and
track athlete.
Her track coach Jennifer McGraw describes her as “an excellent student from a loving family.”
Explaining how she was able to get excellent grades and keep up with the rest of her interests, she said, “maintaining
the highest GPA in my class is a difficult task. It truly takes time
management but more importantly acknowledging what you do it for. I know
that I am no longer just representing myself.”
Phillips also offered some advice to black students who want to excel in school.
In her words, “My biggest advice to other
scholars of colour is to truly adopt the mindset of Rosa Parks - ’No.’
Do not conform to the stereotypes that have held us under thumbs for so
long. Do not be discouraged when someone speaks out against you, simply
allow what they say to fuel your fire. But more than anything, do not
remain tight-lipped. Stand up for what you believe in and take it upon
yourself to be the change you’ve always wanted. Say ‘No’ to the ways of
the world and stick out.”
She has received the Full-Ride Forty Acre Scholarship to attend the Nursing School at the University of Texas in Austin. Out of 4,000 applicants, only 16 including Phillips, were chosen for this prestigious scholarship.
Her dream is to become a pediatric nurse practitioner and have her own clinic someday.
Related Topics:News
Up Next