The victim borrowed money from friends, her ex-husband and other relatives. 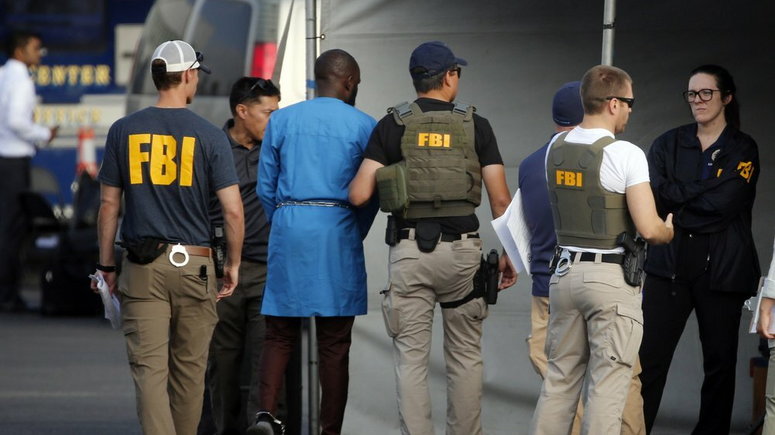 Federal agents hold a cyberfraud suspect, second from left, at a downtown Los Angeles parking lot after predawn raids that saw dozens of people arrested in the L.A. area on Thursday, Aug. 22, 2019 [AP Photo/Reed Saxon]
Federal court documents in the United States of America have revealed how a Nigerian scammer engaged in a fraudulent online relationship with a Japanese woman to dupe her of a total of $200,000 (N72 million).
The scammer, who called himself Terry Garcia, a U.S. Army captain stationed in Syria, reached out to the woman, identified as FK, on an international site for digital pen pals in March 2016, according to documents seen by CNN.
After initiating an online romantic relationship with his victim, the scammer started asking FK for money after he told her he’d found a bag of diamonds in Syria that he wanted to smuggle out.
He told her he couldn’t do it himself because he was injured and introduced her to associates he said would help facilitate the transfer.
One of them claimed to be a Red Cross diplomat who could get the diamonds shipped to FK’s location. Another claimed to work for a shipping company that’d smuggle the diamonds past customs.
FK kept getting money requests from the scammer and his associates, for different reasons each time, and had to borrow from friends, her ex-husband and other relatives to keep up.
She was also, at some point, threatened with imprisonment if she didn’t continue to pay, and made a trip to Los Angeles in the U.S. after she was told by the scammer that a Russian bank manager had embezzled more than $33,000 of her funds.
“FK estimates that she made 35 to 40 payments over the 10 months that she had a relationship with Garcia.
“During that time, the fraudster(s) emailed her as many as 10 to 15 times each day, and Garcia was asking her to make the payments, so she kept paying to accounts in Turkey, the UK and the US,” the criminal complaint read.
For 10 months, the two communicated daily on a Yahoo email address because the scammer said he wasn’t allowed to use a phone in Syria.
The scam has been linked to an international criminal ring ran by two Nigerian men based in Los Angeles and linked to dozens of associates operating mostly from Nigeria.
The U.S. Department of Justice on Thursday, August 22, 2019 indicted a total of 80 people, many of them Nigerians, in connection to massive fraud and money laundering. 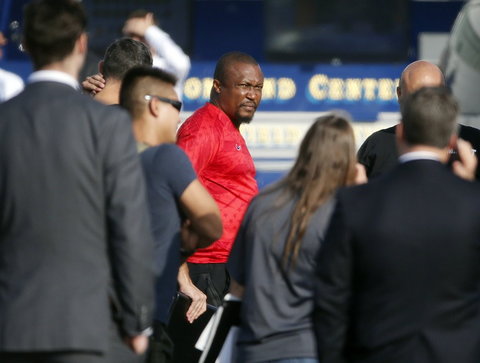 U.S. federal agents hold a cyberfraud suspect, center, at a downtown Los Angeles parking lot after predawn raids that saw dozens of people arrested in the L.A. area Thursday, Aug. 22, 2019 [AP Photo/Reed Saxon]
While speaking at a press conference announcing the indictments on Thursday, the Assistant Director in Charge of the Los Angeles Field Office of the Federal Bureau of Investigation (FBI), Paul Delacourt, said investigation into the criminal ring began in 2016 with a single bank account used to receive funds stolen from a compromised business email.
“The case then evolved into a complex, sophisticated, extensive conspiracy involving various types of cyberfraud through business emails compromise, traditional romance schemes, and the laundering of the proceeds of those frauds,”he said.
He said the case involves 32 confirmed victims located in the U.S., Japan, the United Kingdom, Lebanon, Ukraine, China, Mexico, Germany, Indonesia, the United Arab Emirates and Trinidad and Tobago.
Eight elderly American victims lost thousands of dollars to romance scams and other fraudulent get-rich-quick schemes.
Delacourt disclosed that the FBI is working with security agencies in nine countries to apprehend 57 defendants. The losses in the case, he said, are approximately $10 million.
Suspects could go to prison for decades
In a 252-count federal grand jury indictment unsealed on Thursday, the defendants are accused of participating in a massive conspiracy to steal millions of dollars through a variety of fraud schemes and launder the funds.
31-year-old Valentine Iro and 38-year-old Chukwudi Christogunus Igbokwe, both Nigerians, were used by the network for bank and money-service accounts that could receive funds fraudulently obtained from victims.
Iro and Igbokwe allegedly collected bank accounts, fielded requests for bank account information, provided that information to co-conspirators around the world, and laundered the money obtained from victims.
They did this in exchange for a cut of the money stolen from victims of the various fraud schemes.
“We believe this is one of the largest cases of its kind in US history,” United States Attorney for the Central District of California, Nick Hanna, said during a press conference on Thursday.
The suspects are on the hook for conspiracy to engage in money laundering; conspiracy to commit wire fraud, mail fraud, and bank fraud; wire and bank fraud; and money laundering.
Other charges include engaging in monetary transactions in property derived from specified unlawful activity; operating an unlicensed money transmitting business; destruction of property to prevent seizure; false statements; aggravated identity theft; aiding and abetting; and criminal forfeiture.
“If convicted,” Hanna said, “all of the defendants face potential decades in federal prison.”
Related Topics:News
Up Next

Extrajudicial killing: The 4 SARS operatives have been arrested