He was faster and landed the bigger shots as Silva tired out as the game wore on. 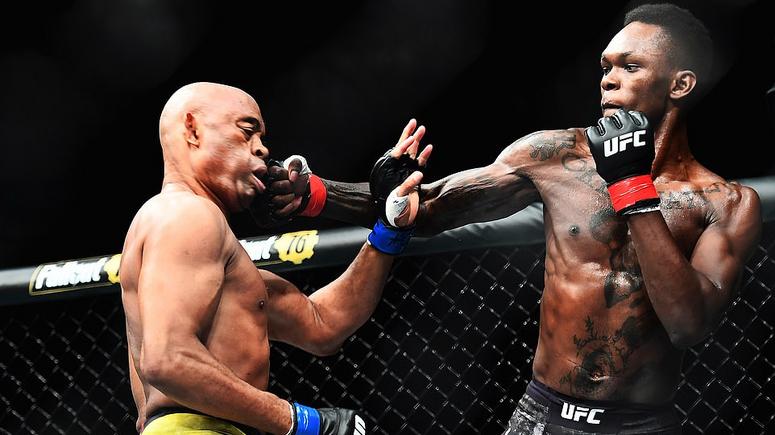 Israel Adesanya Vs Anderson Silva (Getty Images)
Nigerian-born New Zealand fighter Israel Adesanya bettered legendary Anderson Silva in UFC 234’s main event in Melbourne on Saturday, February 9.
Adesanya Vs Silva was bumped up to be the main event of the UFC 234 in the last minute after originally scheduled between middleweight titleholder Robert Whittaker and challenger Kelvin Gastelum after the champion suffered a hernia.
The fight didn’t disappoint as Adesanya and Silva dazzled in an entertaining bout.
Old Vs new 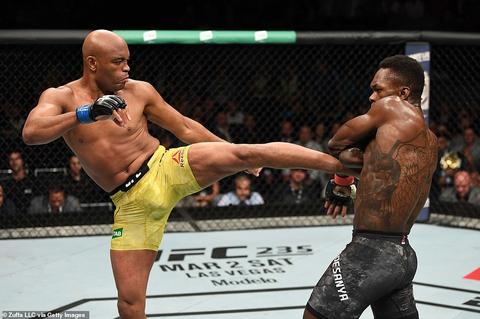 Israel Adesanya Vs Anderson Silva (ZUFFA LLC/Getty Images)
Israel Adesanya Vs Anderson Silva (ZUFFA LLC/Getty Images)
Despite being 43 and 14 years older than his challenger, Silva had enough left in him to get his share of the moments, managing to work with his right hand and hit some momentum.
Adesanya is considered to be ‘a younger Silva’ and he didn’t disappoint on the night, showing that he is the one in his prime.
He was faster and landed the bigger shots as Silva tired out as the game wore on.
Silva seemed to have figured out Adesanya’s fight plan as he simply moved his head back to avoid his opponent’s left high kick.
The Brazilian got some shots by standing in the pocket but Adesanya had more fire in him and became fierce as the game went on.
Adesanya fought maturely, ignoring Silva’s urges to come forward and staying put to combat the Brazilian’s rushes.
As Silva rushed on, Adesanya dodged brilliantly and escaped as Silva worked his right hand brilliantly.
It was in the third round that Silva managed to show some momentum but he didn’t have enough to disturbed his younger opponent.
The judges scored 29-28, 30-27, 30-27 in favour of Adesanya at the Melbourne’s Rod Laver Arena.
“This is crazy. This is like for a kid just to play, if I’m playing basketball, to play Michael Jordan this is it for me, I don’t do EA Sports this is for real,” Adesanya said.
There was a lot of mutual respect from both fighters after the fight.
“You the man,” Silva told Adesanya who responded saying; “You the man, you’ve been doing this for a long time. UFC 90, I still remember the DVD bro. I’ve been watching you for a long time.”
Nigerian-born
Adesanya was born in Lagos but moved to New Zealand with his parents. Although he left Nigeria at the age of 11, the now 28-year-old is very much in touch with his Nigerian roots.
He has ‘Broken Native’ tattooed across his chest coupled with a large map of Africa which serve as a reminder of his cultural heritage.
“I’ve got Africa stamped on my chest, and I’ve outlined Nigeria because that’s my bloodline,” he said in 2018.
He is also very keen to introduce mixed martial arts to Nigerians.
“I want to be the guy that introduces Nigerians to this game. People might look at me and think I’m this and that, or I’m special or whatever. I was the runt of my people. I was a skinny-ass little kid with a big-ass head,” he said in 2018.
“I see all these kids when I go back home and they’ve got so much potential. I think I’m the only Nigerian that doesn’t f**k with football, everyone loves it over there. Hopefully, I can push some other Nigerians into MMA.”
The win against Silva was Adesanya fifth in his less than a year in the UFC and he’s now 16-0.
Related Topics:Sport
Up Next