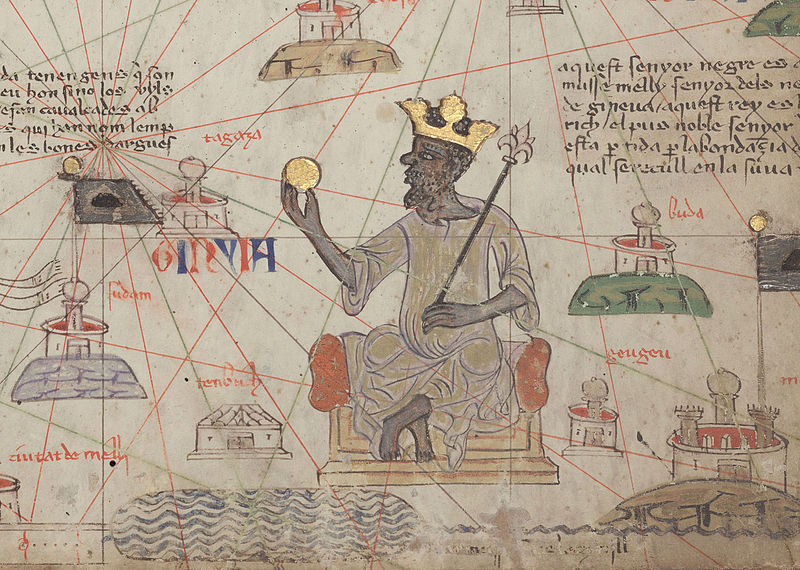 Mansa Musa | Photo: Wikipedia
The debate about who the richest man never range far from Jeff Bezos, Bill Gate and Warren Buffet. However, these men’s wealth cannot hold a candle to Mansa Musa whose extravagance was so much that it wrecked a country.
Who is Mansa Musa?
In 1312, Mansa Abu-Bakr abdicated the Malian Empire in order to go on an expedition to explore the limits of the Atlantic Ocean. He reportedly embarked on the expedition with a fleet of 2,000 ships and thousands of men, women and slaves. They sailed off but never to return.
His brother, Musa Keita, better known as Mansa Musa assumed the throne. Under Musa’s reign, the Malian kingdom prospered and expanded. His kingdom included modern-day Senegal, Mauritania, Burkina Faso, Niger, The Gambia, Guinea-Bissau, Guinea and Ivory Coast.
The Malian Empire
Mali was extremely wealthy. This was due to the tax on trade in and out of the empire, along with all the excess gold. The Mali Empire flourished because of its trade above all else. It contained three immense gold mines within its borders unlike the Ghana Empire, which was only a transit point for gold. The empire taxed every ounce of gold, copper and salt that entered its borders. By the beginning of the 14th century, Mali was the source of almost half the Old World’s gold exported from mines in Bambuk, Boure and Galam.
Musa’s Pilgrimage to Mecca
The Kingdom of Mali appeared on the map of the known world when Mansa Musa decided to journey to Mecca through the Sahara desert.
Musa was a devout Muslim who could read and write in Arabic. In 1324, Mansa Musa embarked on a pilgrimage to the holy city of Mecca. He had an elaborate procession that included 60,000 men, all wearing brocade and Persian silk, including 12,000 slaves, who each carried 1.8 kg (4 lb) of gold bars, and heralds dressed in silks, who bore gold staffs, organized horses, and handled bags.
Musa provided all necessities for the procession, feeding the entire company of men and animals. Those animals included 80 camels which each carried 23–136 kg (50–300 lb) of gold dust.
14th-century scholar and historian, Ibn Khaldun had this to say of the procession:

“He made a pilgrimage in 724/1324 […]. At each halt, he would regale us [his entourage] rare foods and confectionery. His equipment furnishings were carried by 12,000 private slave women (Wasaif) wearing gown and brocade (dibaj) and Yemeni silk […]. Mansa Musa came from his country with 80 loads of gold dust (tibr), each load weighing three qintars.”

Musa was not just extremely wealthy, he was excessively generous. He gave to the poor and to cities along his route. In Cairo, where he stayed for three months, he gave out so much gold that the price of gold plummeted for 10 years.
Musa returned from Mecca in 1325. He brought back many Arabian scholars and architects. He funded literature and built schools, libraries and mosques.
Mansa Musa died in 1337.
Related Topics:Culture
Up Next