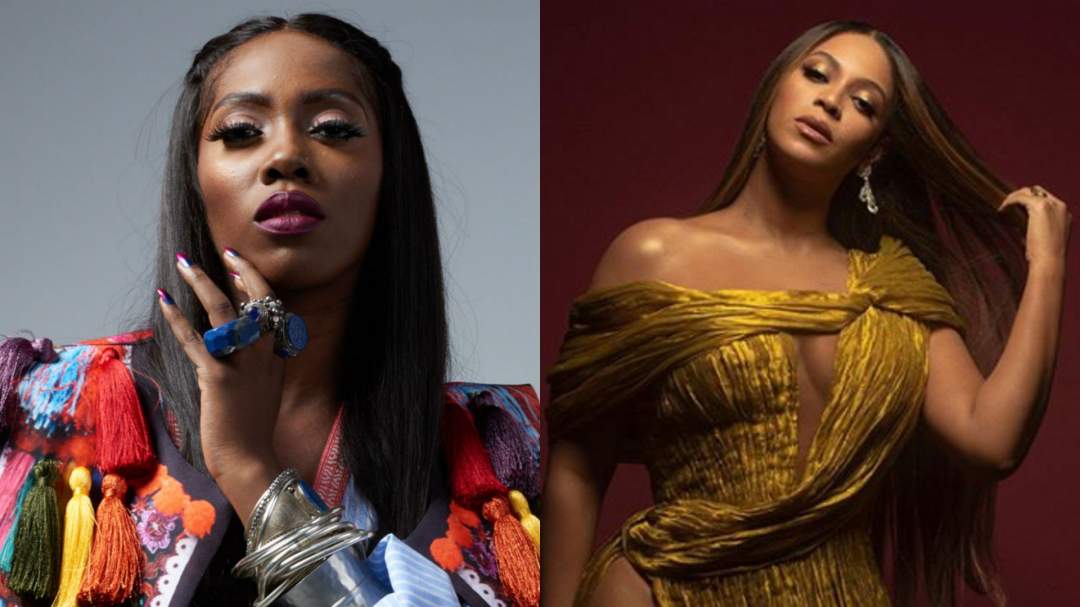 Popular Nigerian singer, Tiwa Savage has spoken up on her collaboration with Grammy award singer, Beyonce on her new album.
Beyonce, on Tuesday, unveiled the track-list of her new album, ‘The Lion King: The Gift’, which is the musical accompaniment to the new Disney movie.
The album features six Nigerian pop stars namely: Yemi Alade, Burna Boy, Mr. Eazi, Tekno, Wizkid, Tiwa Savage as well as Ghana’s Shatta Wale.
The Grammy award-winning singer had disclosed that she worked with Wizkid, Tiwa Savage and other African acts because she wanted to ensure that she worked with the best from Africa and not just sample sounds from Africa.
Speaking on the highly anticipated album which has received major commendations from Nigerians across the globe, Tiwa Savage, on her Instagram page, described the soundtracks as a reminder of who ‘Africans’ are, and the celebration of African kings.
The mother of one wrote: “Beyonce and the whole park wood team, thank you and God bless you all.
“Where do I start with this album. I’ve never been more proud to be a brown skin girl just like I’m so honored to be a mother to a King. My baby Jamil will be 4 in a few days and I realized that I gave birth to a KING. Mufassa had to remind Simba that he is the son of a king, that’s the message of this beautiful song. It is dedicated to African men and all men of African descent. Our kings are being killed and some jailed without justice.
“Yes, I know this is a movie that shaped a lot of our childhood and we didn’t really see the true message behind it but I believe this soundtrack is a celebration and reminder of who we are.
“I pray you are blessed while you listen to this song. You’ve been hurt too long and we appreciate you, African kings. You are royalty. Omo oba ma gba gbe, run ti oruko Baba re (Son of a king, don’t you EVER forget) You are the key to your kingdom. Lion King.”
Related Topics:Celebrity Gist
Up Next