Nigerian banks proposed to telecom companies to charge customers directly for USSD services, a memo seen by TheCable has revealed.
This seems to contradict the public denial by bank CEOs on Monday.

They said the decision “on whether, and what amount, to charge a customer for accessing USSD is entirely that of the telco company, in the same way a customer is billed for calls, SMS and data”.

In a letter to the Association of Licensed Telecommunications Operators of Nigeria (ALTON) by the Body of Banks’ Chief Executive Officers (BOBCEO) dated September 16, 2019, the bank MDs had proposed an “orderly implementation” of end-user billing for bank customers, “aligning with the standard practice for USSD billing.”

The letter was signed by 13 banks.

On Sunday, MTN sent this message to its customers: “Please note that from Oct 21, we will charge N4 per 20 seconds for USSD access to banking services. Thank you.”

In the memo to ALTON, the bank MDs had kicked against sharing the revenue from USSD transactions with the telcos.

The telcos, who provide the platform for the USSD service, had proposed to take a cut of N4.50k per 20 seconds from the charges paid by customers to the banks.

However, the banks kicked against it, alleging that it would raise the cost by 450 per cent.

THE BANK CEOS’ LETTER IN FULL

Re: Anti-competitive practices on Reverse Corporate Billing for Bank USSD Services
We write with reference to instructions to our USSD aggregators, demanding Banks to subscribe to corporate-level billing for USSD services.

The demand forces us to a level where we will pay N4.5 per USSD session of 20 seconds, amounting for (to) around 450% increase in tariff.

Many transactions extend to two or three sessions. This is a cost that will destroy the financial inclusion strides made by banks where we have included almost 20m more citizens in the financial system by building services that run on USSD. Our partnership spirit and recognition of USSD as a critical national asset to drive financial inclusion has served all stakeholders well, especially those previously excluded Nigerians.

Beyond the huge cost-per-session, this would render the laudable financial inclusion initiatives of the Federal Government of Nigeria unsustainable which would impede development and economic growth. We will resist the move to reverse billing by multinational telecomms companies for the good of our National agenda.

Reverse billing gives no visibility to on actually sessions used forces to pay for failed sessions and leaves us exposed to spurious USSD usage that will increase costs.

We are proposing an orderly implementation end-user billing for bank customers, aligning with the standard practice for USSD billing.

Customers using non-bank services already pay for USSD sessions. It forces cost transparency between the Telecoms Company and customer, and will ensure the customer demands a reliable service that works when they need it at a price they can afford. In the Reverse Corporate Billing situation we are unable to attain competitiveness nor transparency.

We trust that on understanding our concern, and the perilous impact that your stated actions will have on the National Financial Inclusion Strategy, you will implement end-user billing to ensure customers have a fair deal and a choice. Our relationship until this juncture has been a symbiotic one that benefits the millions of users of cost-effective banking solutions, the banks and the telecom companies for whom Bank channels have become one of the biggest sellers of airtime using the same USSD channels and other applications or integrations. If USSD services are used to ransom banks into exiting our financial inclusion goals, everybody will 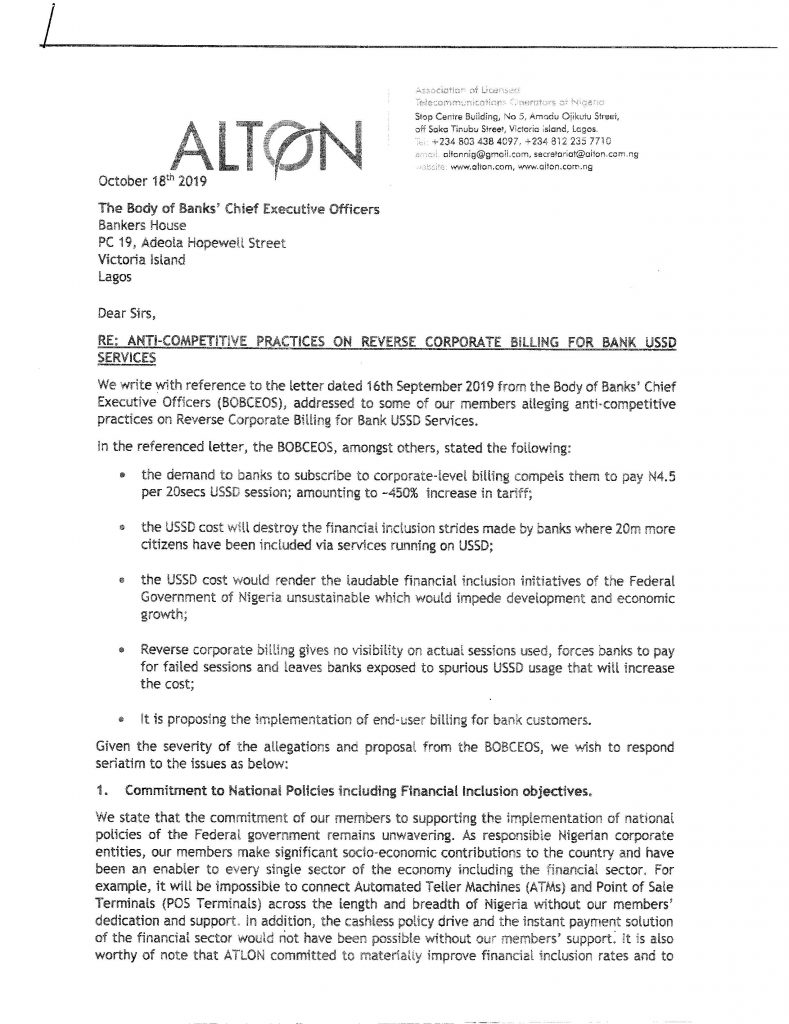 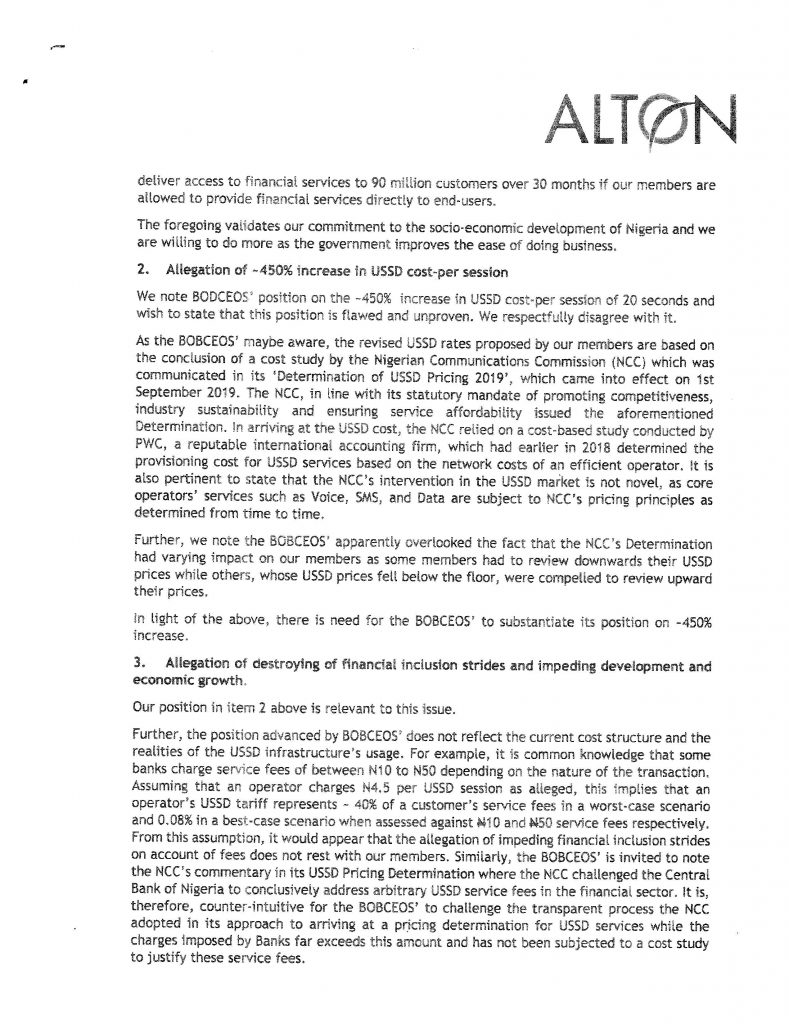 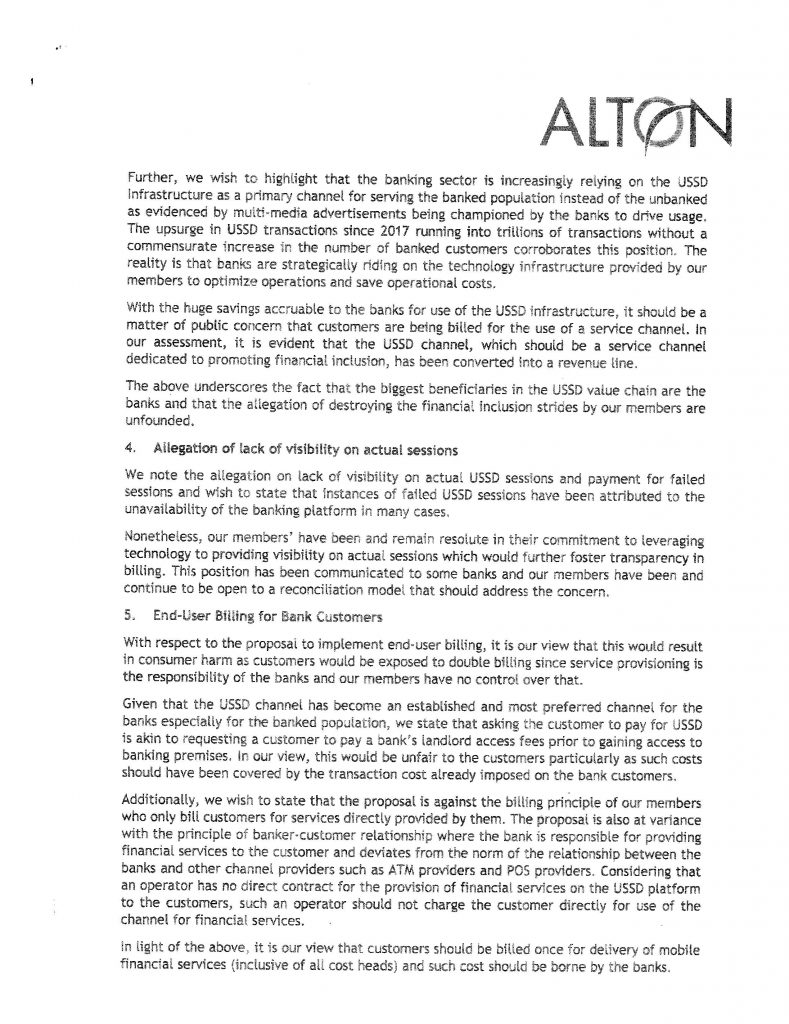 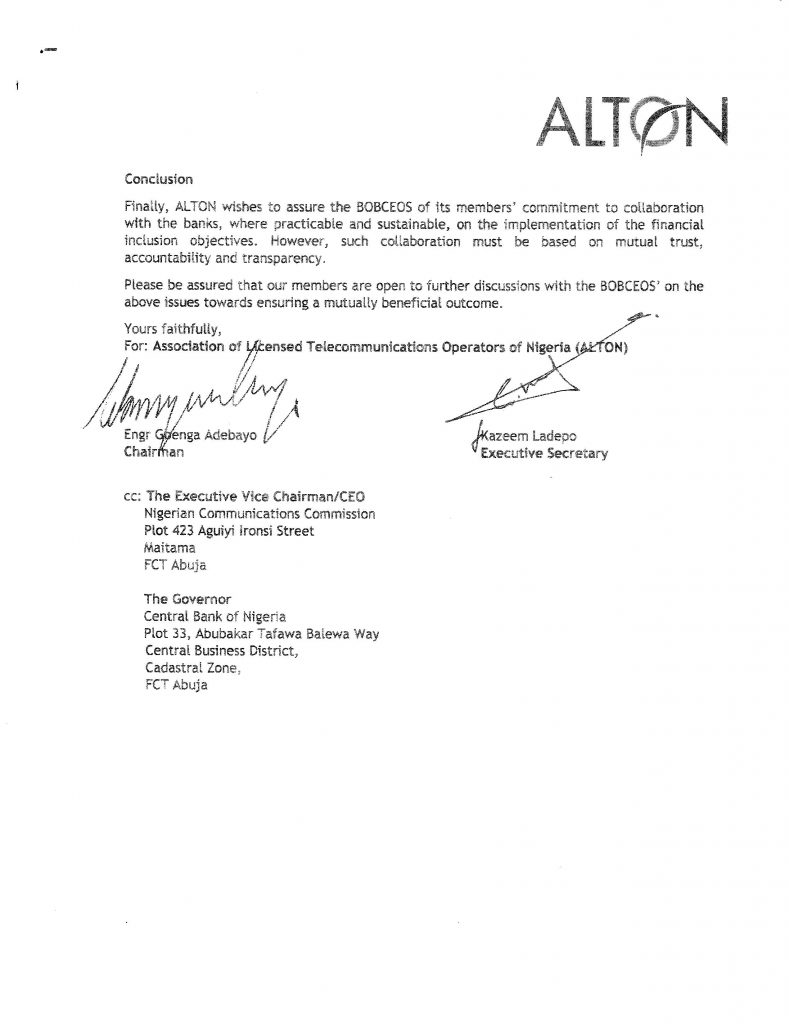 “Stop Praying All The Time, Get To Work!” – Babatunde Fashola Tells Nigerians