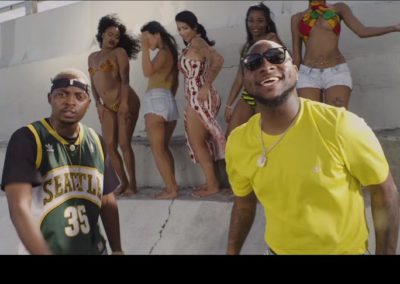 Is there a beef?

There were rumours on the street towards the end of 2018 about the
existence of a beef between Olamide and Davido. One of the alleged
factors that started the beef was said to be Olamide’s reaction to the
news shared by davido about his 2017 smash hit single, “Fall” hitting
100 million views on YouTube. When Davido shared the news, Olamide took
to Twitter to also post his “Wo” video with a caption that talks about
him not making noise about his videos as well as not buying views like
some people do.

Many people considered Olamide’s tweet as a shade to Davido and were
waiting for an escalated beef that never came. Although there hasn’t
been any confirmation about a beef, but one thing that gave some fans an
hint that a beef exists between them was the fact that Davido wasn’t
present at Olamide’s Lagos concert and vice-versa which never had been
the case.

Even when Davido had his history making concert at the O2 Arena in
London, Olamide did not send congratulatory messages to the DMW boss or
even post about the event before it was held which is very rare
considering the fact that they used to be friends even outside music.

Since Olamide’s tweet, there hasn’t been any sort of a relationship
between the two, no seeing them together at events, no shout-outs to
each other, no contact whatsoever. And now there is another development
which further cement some people’s belief that there is truly some sort
of beef between the two artistes, and that is the recent Olamide
freestyle single; “Buga Small Small.” (STREAM/DOWNLOAD MP3)

Looking at the lyrics of the song, there are some lines that directly relates with Davido,
“Remember before you start to dey get paper, before you start to dey
smoke poli, before you see show for December, (December oo) Remember
some people don dey get paper, some people don dey smoke poli, dey don
dey scatter December” is a line that could be addressing
Davido and his supposed over-excitement about his shows in December and
his alleged pompousness.

Aside the line above, there are other lines that you could easily be traced to Davido (Check Here For Full Lyrics)
With all these, we perceive there might be an on-going silent beef
between the two. But until it’s “clearer than the eyes can see,” we
wait!!

Meanwhile, judging from the lyrics of “Buga Small Small,” do you think Olamide is sending a message to Davido ?

DJ Spinall ft Kojo Funds – What Do You See

DJ Khaled Says “Father Of Asahd” Is Coming In May