Already, the hospital management in a statement signed by one Dr Omotoso Ayodele, regretted the abandonment of the corpses by their owners. 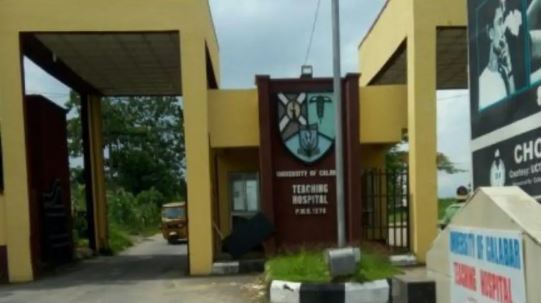 University of Calabar Teaching Hospital
Several hundreds of abandoned corpses littered University of Calabar Teaching Hospital (UCTH) mortuary.
Sources in the hospital that declined giving their names, alleged that some of corpses have been there for years and closed gap for new ones to be brought in.
It was also alleged that some of the corpses were abandoned by their owners while others were also accident victims who were brought in by unknown security agents.
Already, the hospital management in a statement signed by one Dr Omotoso Ayodele, regretted the abandonment of the corpses by their owners
Dr Ayodele said that the mortuary was undergoing cleaning exercise and explaining that the management had given 90 days for the owners of the corpses to come and evacuated them.
“A short notice from date of this announcement is given to allow the public come and claim the bodies of their loved ones that have lasted 90 days or more in the mortuary; after which all unclaimed bodies in that category would be disposed off.”
When DAILY POST contacted one Mathias Okon via a phone number in the statement on Thursday, whe declined comment but asked our reporter to get approval from the management.
Disappointingly, when our reporter called on the UCTH Public Relations Officer, Mrs Ekanem Solomon, she declined comment and referred this reporter to the Chief Medical Director, Prof Ikpeme A. Ikpeme.
Several calls put across to the Chief Medical Director Prof Ikpem A. Ikpeme on Thursday, to react on the issue of abandoned corpses, he ignored the calls
However, it was gathered that the corpses would be given mass burial if the owners failed to reclaim them as most of them have been in the Morgue for over five years.
Related Topics:News
Up Next