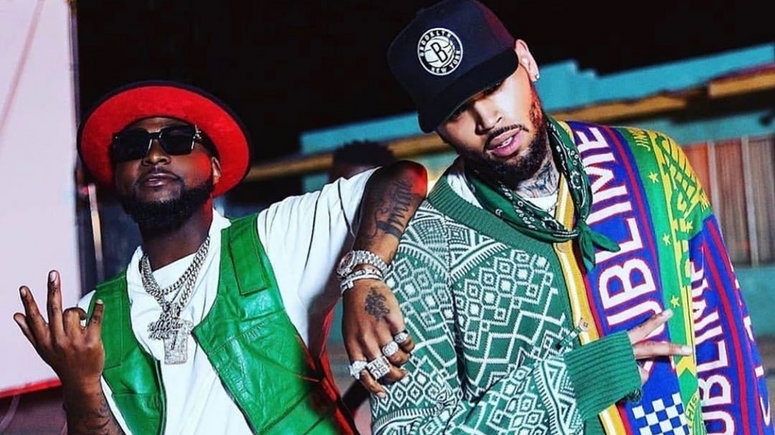 ‘Blow My Mind’ by Davido featuring Chris Brown and Top 5 times Nigerian artists featured Non-African acts (since 2000). (Guardian NG)
Cultures influence cultures and art inspires art. If art cannot inspire art, then art has failed. The same sentiment obtains for culture.
Artists are humans. When they conquer one region, they set their sights on another region or fan base. This, alongside a need to collaborate and create newness for fans inspire collaborations in music.
Artists cannot afford to remain stagnant. If they do, they go backwards because other artists also improve, so they collaborate.
But for Nigerian acts, they mostly always goof with non-African features for one reason or the other. However, once in a while, some features break the evil cycle of terrible outputs.
To celebrate some of these exceptional moments, this list celebrates the top five Nigerian and non-African collaborations since year 2000.
The metrics are participation, quality, acceptance and balance of artistry. There’s also added advantage of bringing that feature into the sound you project.
Here are the top five times Nigerian artists featured Non-African acts (since 2000);
5) P Square featuring Rick Ross – Beautiful Beautiful Onyinye
The collaboration that shocked Nigeria. It wasn’t just about Rick Ross on a very Afrobeats song, it was about how Rick Ross didn’t have to change much to fit in.
While the greatest contemporary group African pop has seen later featured American rapper, T.I, and before then featured Akon on ‘Chop My Money (Remix),’ this feature is unmatched.
It also helps that ‘Beautiful Onyinye’ was a hit that has since gone down as a classic – ‘wash’ – song.
4) Wizkid and Skepta – Energy (Stay Far Away)
A collaboration of epic proportions featured complimentary performances from Shitta King of small London with a mastery of afrobeats and an actual king of London, with a specialization in grime.
With a video that celebrates the Nigerian sub-culture of alte in aesthetic, picture and casting, and a hook to rival anything Wizkid has ever done, this was one of the top songs of 2018.
Skep, whose father is from Ogun State in Nigeria croons the Sarz-produced afro-swing to perfection with baritone bars.
3) Wizkid featuring Skepta and Drake – Ojuelegba (Remix)
In 2014, Wizkid was already the biggest star in Nigerian music, but his second album, Ayo – though now recognized as impactful – was sonically underwhelming.
But something happened with his very afrobeat single, ‘Ojuelegba.’ It championed the second post-2010 wave of afrobeats obsession in the UK and the west. The first wave was championed by ‘Oliver Twist,’ D’banj’s classic number which peaked within the top 10 of the UK official singles charts.
Superstars like Alicia Keys were seen rocking to the song in viral videos. Then, it got better. A watershed moment ensued when Skepta opened for Drake on the London leg of his Would You Like A Tour?
Word on the street says Skepta played ‘Ojuelegba’ for Drake and the superstar jumped on what was a remix of the song. Drake and Skepta not only performed on the song like they meant it, they propelled the song to unprecedented heights.
2) D’Banj featuring Snoop Dogg – Mr. Endowed (Remix)
In 2010, D’Banj was gearing up for his fourth studio album. While the album has since joined Dr Dre’s Detox in the abyss of wonderful unreleased content, he released a wonderful single, ‘Mr Endowed.’
With Don Jazzy at the epicentre of near-demonic sonic mastery, crafting some of the best beats Nigerian pop will ever see, he orchestrated the original ‘Mr Endowed.’ Nobody could have dreamed of what was to come. Rumours not only gained momentum, they birthed a healthy baby with dreamy eyes.
Snoop Dogg, the American rap legend christened a first African nephew. His name was D’Banj. If being giddy represented cardio, many a Nigerian youth around and popping in 2011 would have been lean. And to make us mad, Don Jazzy went bonkers with the beat that included more dreamy strings and a celebratory choir effect.
It was a remix to ‘Mr Endowed.’ It’s not always talked about, but this song represents one of D’Banj’s greatest ever performances – and he has many. He delivered in Yoruba and made Uncle Snoop drop bars on a classic Nigerian song.
1) Davido featuring Chris Brown – Blow My Mind
You might be mad and you might be angry, but facts are facts. It might be unfair on your faves, but Chris Brown dancing in the rain – real or fake – for a video shoot is the height of participation.
Like that was not enough, the video earned seven million views on YouTube within one week. Before it was released, people feared for Davido at a time the Nigerian music industry was experiencing a ‘turbulence.’
Talking numbers might be unfair. So let’s forget numbers and talk participation and quality of the music Chris Brown participated like he needed the song. Quality might come down to preference, but some Nigerians have also featured Chris Brown on mediocre music. So, take that the way you want…
Chart success is also a factor. The song is as accepted here as it in the west – albeit to a much reduced extent. Most of the other songs on this list can’t boast of that factor; impact on both coasts.
Source: Pulse
Related Topics:Music
Up Next

Zlatan Spends N1.9M On Shopping, Complains Of How Many Quantities He Got