Following the murder of her husband, Ajemine Douglas started having sexual relationship with the man she hired to deal with her husband. 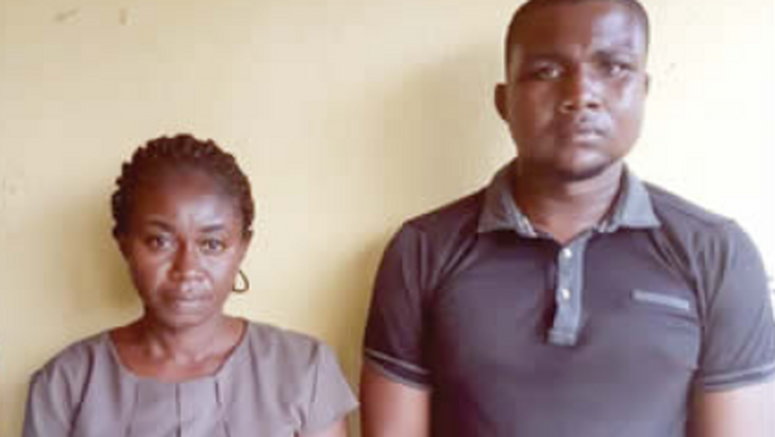 Ajeminie Douglas and Sunny after their arrest (Punch)
Operatives of the Inspector General of Police Special Intelligence Response Team has arrested an employee of the Rivers State Primary Healthcare Board, Douglas Ajemine for paying two men to kill her husband.
Douglas, who is said to be a mother of four was arrested at Abalama area of the state after she started having love affairs with Kingsley Nna, one of the killers of her husband, Inedugoba Tyger.
Following her arrest, the 41-year-old mother of four said she hired Nna and his friend, Sunny to deal with Tyger, her husband because he was in the habit of abusing her physically and sexually.
She added that Tyger at a point, abandoned her and their children and moved into a new apartment in Port Harcourt with another woman, adding that she hired Nna and Sunny in order to stop the abuse.
According to Punch, an anonymous police officer who spoke with the Newspaper said that upon receiving a petition on the matter, the IGP, Adamu Mohammed, instructed them to unravel the mystery behind Tyger’s killing. 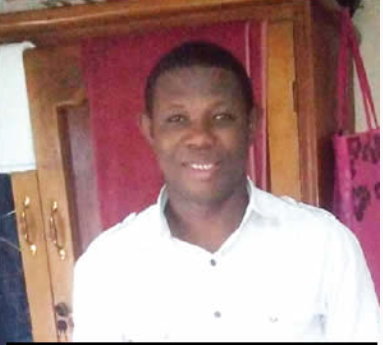 Inedugoba Tyger was killed by the men his wife hired to beat him up because he used to abuse his wife. (Punch)
Police investigations showed that Douglas in a bid to cover up the crime took her late husband’s car to a nearby market and parked it where it could be found.
Punch reports that Douglas thereafter used Tyger’s mobile phones to send text massages to his brothers, telling them that he was travelling out of the state on a business trip.
The brothers reported Tyger’s disappearance to the IGP after waiting for days without hearing from him.
After her arrest, Douglas led police operatives to arrest Nna, who she has been having sex with after killing her husband.
She said, “I met my husband, Inedugoba Tyger, in December 2014 and we got married the following year.
“He had two children before I married him and he said that he needed me to help him take care of them.
“I accepted and moved into his house and I started taking care of his children but usually spent two weeks with his children after which I would move to my own house to be with my own children.
“That same year, he proposed that we should live together and I moved into his house with my second son. Soon, he lost his job and we relocated to our village in Buguma and his children were all staying in my house. By April 2016, my husband got some money from his former company and went to my family and paid my bride price.
“We then relocated to his family house and since he had no job, he became aggressive and abusive.
“Later, he started coming home to take things to sell and when I refused, he would beat me up and leave. Then I moved out of his house in Abalama and went to Port Harcourt.
“He traced me to where I was staying and tried to have sex with me in the passage of that house in January 2019. I approached Kingsley Nna and told him what I was facing in the hands of my husband and he promised to help out.
“Another time, my husband came to my place and tried to forcibly have sex with me, I called Kingsley (Nna) on the phone to come.
“He came with one of his friends and started beating my husband. I left them inside the house and when I returned, I was told that he had died. Kingsley warned me not to tell anyone or else he would kill me and my children. My husband’s body was buried close to our house.
“I later sold his phone for N15,000 and Kingsley started demanding money from me. I gave him N150,000 but he went ahead to start having sex with me. Not too long after then, officers of the IRT came and arrested me.”
Confessing to the crime, Nna said he was paid N100,000 to beat Tyger, adding that Douglas forced him into having sex with her.
He said, “In December 2018, I met Ajemine and she told me and my friend, Sunny, that her husband was maltreating her.
“I told her that whenever the man came around, she should call us.
“One day, she called and said that she wanted us to beat the man. In January this year, she gave us N50,000 and said she would call us whenever the man was with her in Abalama.
“Some days later, she called us and said that her husband was with her but we couldn’t make it down to her place that day. On January 26, she called again in the afternoon and said the man was coming and that we should come and beat him.
“When we got there, we met the two of them naked, as if they had just finished making love. The room was dark and the woman put on a torch so that we would see the man on the bed. Sunny wrapped the man’s face with a wrapper and a pillow, then I started beating him.
“He woke up and started struggling. He removed what was used to tie his face, saw Sunny and recognised him. The two of them started speaking their Kalabari language. I don’t know what they were saying but Sunny insisted that we should kill the man since he had seen his face.
“I held him and Sunny strangled him. We informed the woman who was outside when this happened that her husband was dead but she said she didn’t instruct us to kill him.
“She gave us a shovel and showed us where to bury him. The next day, she called and gave us N30,000. That evening, she called and said she wanted me to make love to her.
“We met at a hotel and made love for two hours. One week later, we met again in that same hotel and made love again. We made love a third time before I stopped responding to her calls because she wanted to turn me to her new husband.”
Officials of the Intelligence Response Team that the three suspects would be charged to court at the end of investigations.
Related Topics:News
Up Next

Preview:Super Eagles out to mend hurt as Nigeria take on Cameroon in 2nd round clash of AFCON 2019