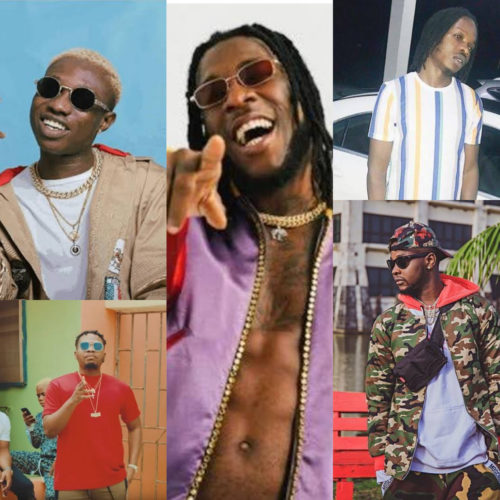 The first-half of 2019 was good for a lot of Nigerian music artistes as they were able to stay relevant with their song releases, features and other criteria that kept them and their activities a constant mention on the lips of music fans.
Looking at these artistes, we have been able to narrow down to a list of 5 the music artistes that did greatest in the first half of the year.
However, of these artistes who have been enlisted below, we would like to know which performed best in the first-half of 2019.
Burna Boy
Burna had a fantastic first-half of 2019 as he released two banging singles, “Dangote” & his recently released “Anybody.” Both songs have dominated top music charts in Nigeria and are getting constant rotation on radio.
And Aside Burna’s music releases, he had an amazing first-half of the year outside the studio, playing festivals, going on tour and nailing his geeat run with his recent victory at the 2019 BET Awards where he won Best International Act.
Kizz Daniel
Rubbing off from the fine attention he was having towards the end of 2018 when he dropped his “NBS” album, Kizz Daniel is another artiste who did absolutely well in the first-half of this year. He had “Madu,” “Poko,” two hot singles from his album which rocked the airwaves.
He then switched the game even upper when he dropped his much trended eventful single; “Fvck You” which almost turned the industry upside downwards after lots of industry heavyweights did a cover to it springing up beefs amongst them. He was on tour as well, holding his first ever headlined show in London at the Indigo At The O2 which was a sold out.
Olamide
Baddo had a decent first-half of the year and this can largely be attributed to his music releases only. Olamide dropped four singles, “Spirit,” “Buga Small Small,” “Woske” & “Oil & Gas” in which two did well and are still  doing well on the streets.
He hasn’t been on tour and performed at festivals, but he has been musically proactive and this is the reason he has made this list.
Naira Marley
Arguably the most controversial Nigerian artiste of all time, Naira had a mixed first-half of 2019 which all eventually fell in his favour. From his social media altercation with Simi to his famous case with the EFCC, Naira Marley has been the most talked about artiste in Nigeria.
Aside Naira Marley’s controversial issues, he did stunningly amazingly with his music singles, “Opotoyi,” “Am I A Yahoo Boy” and his recently released “Soapy” which are getting massive streaming numbers on music streaming platforms. He is arguably the biggest Nigerian artiste of the first-half of 2019.
Zlatan
This is another artiste who stayed relevant and did well in the first-half of 2019. Zlatan Ibile has been the go-to artiste of the Nigerian music industry since late 2018 when you are in need of a music hit. The indigenous rapper has got on a lot of songs, stamping his influence on them and making them become big.
He also has a single; “This Year” which did decently and still doing good on radio. Zlatan was also a major topic in the music industry as a result of his case with the EFCC which further made him a more popular figure.
Picking from the 5 artistes enumerated above, who do you think had the best first-half of 2019?
Related Topics:Music
Up Next