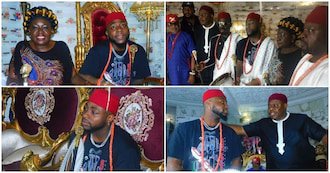 Social media was recently abuzz with the news of Nigerian singer being conferred with a chieftaincy title in Ibusa land, Delta state.
It was previously reported that popular nightlife boss, Cubana Chiefpriest, shared the news on his verified Instagram page and congratulated the music star.
Well, fresh reports have surfaced on social media, that suggest completely otherwise as it regards the title conferred on the singer.
In the report on a Facebook page identified as Nigerians, the Uwolo of Ibuzor, Amaechi Nwaenie, explained that the music star was not conferred with a title, but was simply adopted into the family of his friend.
Nwaenie stated that the father of Davido’s friend, Chief Fred Ajudua, had invited him over to his house, because he had plans to host the music star.
He said while he was at the residence, Ajudua shared his intention to adopt Davido into his family, so as to strengthen the bond of friendship between his son, Bobo, and the celebrity singer.
“While in his residence, Onwa said he wanted to adopt Davido into the Ajudua’s family to straighten the strong friendship between his son Bobo and Davido. I recall someone jokingly asked Onwa if he wanted to give chieftaincy title to Davido’ to which Onwa said a categorical no”, Nwaenie explained.
On why he decided to clear the air, Nwaenie stated that he could not be a party to any act likely to desecrate, denigrate or offend the tradition of the Ibuzor people.
Read full post in screenshot below: 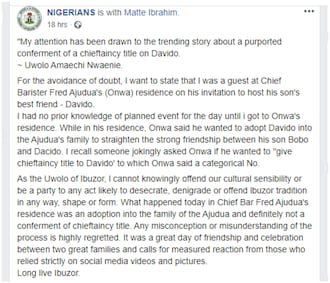 Joshua Gets Help From Legendary Boxer, Klitschko Ahead of Ruiz Rematch