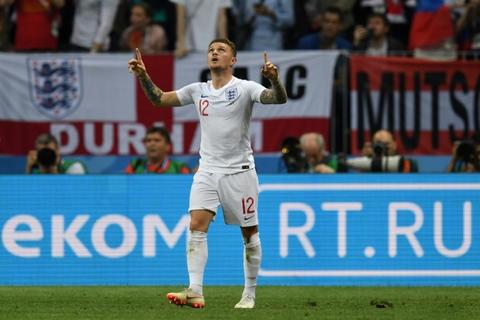 AFP
Kieran Trippier scored his one England goal in a World Cup semi-final
Atletico said on their website they had signed a “fantastic and experienced player from the Champions League runner up” and added Trippier had agreed a three-year deal.
Spanish and British media said Atletico were paying Spurs a fee of 22 million euros ($24.7 million).
Trippier has played 16 times for England scoring one goal, direct from a free kick in the World Cup semi-final loss to Croatia last year.
He joined Spurs from Burnley in 2015 and made 114 appearances for the London club.
The signing continues an overhaul of the capital city outfit’s backline.
Defenders Diego Godin, Filipe Luis and Lucas Hernandez have left, while Brazilian pair Renan Lodi and Felipe has already signed.
Coach Diego Simeone has also forked out 126 million euros for Portugese teenager Joao Felix this summer
Related Topics:Sport
Up Next

5 things Zlatan Ibile said during his interview on Cool FM