Pulev is the current mandatory challenger to IBF champion Joshua, who regained his title along with the WBA Super, WBO and IBO belts. 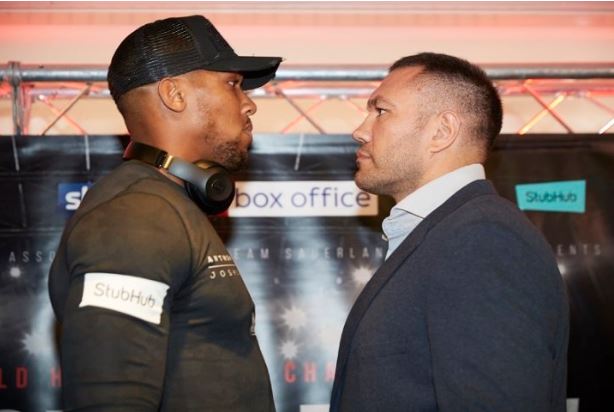 Anthony Joshua, Kubrat Pulev
Kubrat Pulev has backed a claim that he will fight Anthony Joshua in Istanbul in May.
The 38-year-old posted a link on his official social media page to an article which appears to claim that the much-anticipated fight will take place at the Vodafone Arena, which is the home of Turkish football club Besiktas JK.
Pulev is the current mandatory challenger to IBF champion Joshua, who regained his title –– along with the WBA Super, WBO and IBO belts –– in a rematch against Andy Ruiz Jr. at the Diriyah Arena in Diriyah, Saudi Arabia, last December.
The UK, the States or Saudi Arabia are said to be the preferred destinations for the fight, which will head to purse bids if a deal has not been agreed by January 31.
The pair had been due to clash at Cardiff’s Principality Stadium back in October 2017, but the Bulgarian had to pull out with injury and was replaced by Carlos Takam.
Joshua is thought to be keen to return to London for his next fight, with it being revealed last month that the new Tottenham Hotspur Stadium had emerged as a strong contender to host the showdown.
Pulev, known as ‘The Cobra’, has an impressive 28-1 record in his career, with 14 of those wins coming quick.
It appears that Pulev –– who was last in action on November 9 against Rydell Booker at the Chukchansi Park in Fresno, California –– has won the race to be Joshua’s next opponent, with WBO mandatory Oleksandr Usyk, the former undisputed cruiserweight king, being made to wait until later in the year.
The WBO ruled, just hours after Joshua’s rematch victory over Ruiz Jr., that the Londoner must take on the Ukrainian within 180 days or by June 4, 2020.
But with Pulev seemingly in pole position, the Bulgarian is likely to get his chance to clinch global honours sooner rather than later.
Further details will be revealed in due course.
Related Topics:Sport
Up Next

My Pastor Told Me to Be Drinking My Wife’s Urine, But He was Sleeping with Her – Man Opens Up