The Toffees’ Portuguese midfielder suffered a horrible injury during a Premier League clash with Tottenham, but is now on the road to recovery. 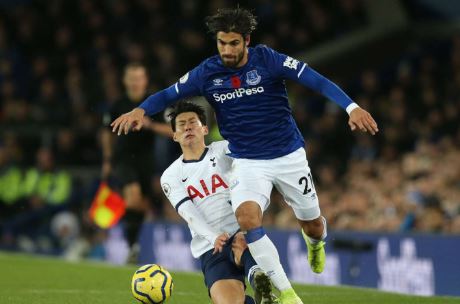 Everton are confident that Andre Gomes will make “a full recovery” from the horrific ankle dislocation he suffered against Tottenham, with the midfielder having undergone successful surgery.

The Portugal international picked up an unfortunate injury when in Premier League action on Sunday.

Having seen his foot buckle under pressure from Son Heung-min, before than being caught by a challenge from Serge Aurier, Gomes’ ankle twisted beneath him at Goodison Park.

He was left writhing in agony, with the severity of his injury moving Son – who was shown a straight red card – to tears and leaving players from both sides visibly shocked.

Gomes was given the best possible on-field medical attention before being whisked off to hospital.

The first steps have now been taken down a long road to recovery, with little time having been wasted in getting the 26-year-old under the knife.

“The Portugal international, who sustained the injury in yesterday’s Premier League fixture with Tottenham Hotspur, will now spend some time recovering in hospital, before returning to USM Finch Farm to start his rehabilitation under the guidance of the club’s medical staff.

“The 26-year-old is expected to make a full recovery.

“On behalf of Andre, the club would like to thank all Everton supporters and members of the wider football family for the overwhelming messages of support we have received since yesterday’s match.”
Gomes was backed by Everton boss Marco Silva to bounce back stronger from an untimely injury after the final whistle blew on Sunday.

The Toffees manager said of a fellow countryman: “It was a really tough moment for us, forgetting the game and result. Andre will have all the support he needs from us.

“It is a serious injury and I am 100 per cent sure Andre will become stronger as a footballer player and stronger as a man, he is a fantastic lad and professional and all the support he needs, he will have from us.

“Our players are sad now, it is a tough moment in our dressing room, but the spirit we showed after that moment was good. It was the toughest moment for us this season.”
Everton had been trailing 1-0 when Gomes was forced from the field, but Cenk Tosun stepped off the bench to snatch a 97th-minute equaliser and rescue a point for the Toffees.