Connect with us
A 41-year-old man has gotten married to a very young girl just about three months after meeting on Facebook. 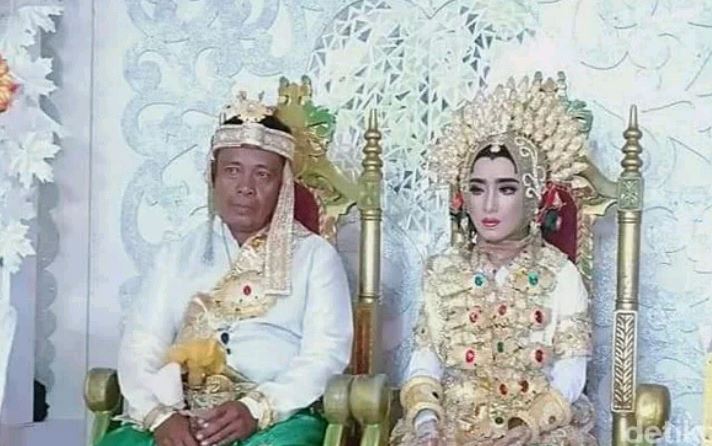 The man married the young girl
Over the past couple of years, the Indonesian province of South
Sulawesi has been in the news with alarming frequency for viral stories
of children getting married, either among themselves or with much older
adults.
According to reports, a 41-year-old widower named Rustam Ashary
last week married a 13-year-old girl, who has been identified by her
initials SW, both of whom are from the Sidrap regency of South Sulawesi.
Rustam met SW on Facebook, and the pair reportedly communicated via
the social media platform for three months before deciding to marry.
“We the families gave our blessings to their relationship,” SW’s
mother, Nurhayati, told Detik after her child’s marriage, insisting
that her daughter was never pressured into marrying Rustam and that they
are now happy together.
“She’s still in Grade 1 at an MTs (religious middle school, equivalent to grade 7),” Nurhayati added when asked about her daughter’s schooling.
Photos from Rustam and SW’s wedding day have circulated online,
some showing them holding up their marriage certificate, confirming that
the union is legally recognized.
The South Sulawesi provincial government say they had no legal
jurisdiction to prevent Rustam and SW’s marriage, but now that it has
happened they are focusing on ensuring that SW still receives her rights
as a child.
“We want to ensure she gets her rights such as to a full education,” South Sulawesi Child Protection Services Head Nur Anti told Detik .
Nur added that the government has urged SW to delay her pregnancy
until after she finishes formal schooling, but the reality is that it
would be difficult for them to intervene in Rustam and SW’s private
lives, whereas, if they weren’t legally married, the 13-year-old would
be considered a victim of statutory rape.
The current legal age of marriage in Indonesia is 19 years old for
men and 16 years old for women. However, the country’s 1974 Law on
Marriage also includes a major loophole to this requirement which allows
marriages to still be considered legal if they are done “in accordance”
with religious belief, known as nikah siri.

As such, underage marriages that have been sanctified by religious
courts or officials must still be officially recognized by the
government — if not, many are satisfied with merely fulfilling religious
or traditional requirements for marriage.
***
Source: Coconut
Related Topics:NewsTrending
Up Next