M.I talks about why Vector “hates” him, Vector vs. YSG, AQ and clarifies the Hennessy/Martell situation. 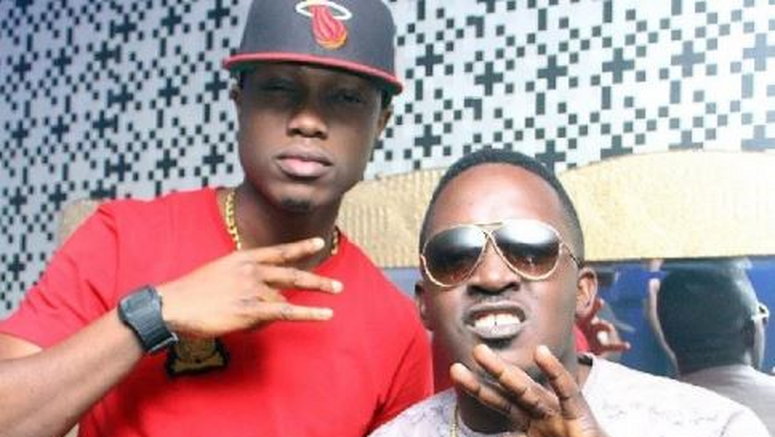 M.I Abaga and Vector when the going was good. (360nobs)
On Friday, September 27, 2019, Nigerian rapper, Vector released ‘Tetracycling.’ It was a diss to his long term arch-rival, M.I. Abaga. It was his second diss track to M.I Abaga in seven days.
The first was ‘The Purge,’ which features Vader and Payper Corleone. It was released on September 20, 2019.
After 15 days of silence which includes M.I scooping Vector for ‘The Purge,’ he releases ‘The Viper.’ It’s a loaded shotgun aimed at Vector’s head. It contains pellets and five-inch nails. Heads are also bound to roll. It’s also quite hilarious that M.I kept calling Vector, “Daddy.”
ALSO READ: A brief history of M.I Abaga vs. Vector
The rap is laid on a smooth Hip-Hop beat that starts with the same sample as that on Ludacris’ ‘Last Of The Dying Breed.’ The bass riffs on the beat itself feels like something cut off three eras of rap.
Here are some of M.I’s talking points from ‘The Viper’;
M.I. confirms where the beef started for him
On September 21, 2019, Pulse placed the start of this beef as track six on Vector’s first album, State of Surprise. The track is titled, ‘Kilode,’ featuring Emmsong. Confirming this on ‘The Viper,’ M.I raps, “You always hated me. Your very first line on your first single showed how you rated, but Lanre see, I’ve always rated you…”
M.I says Vector is jealous and speaks of Vector’s baby mama?
M.I says Vector started dissing him because he didn’t feature on a song after Vector asked. The song in question is, ‘King Kong,’ which was released in 2014. On the issue, M.I raps, “All this because you didn’t get a feature…”
M.I also claims that Vector is jealous, “I swear by my name coz there’s no higher authority. I will not destroy you, instead I’’ll give you maturity. I’m trying to save your life, Lanre. That’s my priority. You let jealousy jealousy f*** your legacy up…
“So when you’re old, your children ask you what happened coz people laughing, just tell them Daddy was jealous while rapping. Daddy was jealous from birth, was jealous since inside the scrotum. Jealous looking at other sperm cells wishing you’d choke em…. Daddy was jealous of M.I and I should have stopped myself…”
Here comes the drama on whether M.I dissed Vector over his baby mama, “Daddy was jealous of your mother, and that’s how I f***** myself.”
AQ
AQ and Vector have collaborated on two songs. Vector featured AQ, Terry Tha Rapman and X.O. Senavoe on the 2011 song, ‘Ginja.’ Then In 2012, both rappers teamed up for ‘Distractions,’ a diss to Reminisce.
However, when Vector rapped that, “Somebody please mess with me, I need a new distraction. Damn A-Q, I bet that crazy n***a laughing…” on ‘Where is Vector,’ AQ went at Vector’s head with a remix of the same song.
On the issue, M.I raps, “AQ was your guy, you did nothing to help him blossom. No persistence, but since he’s been around me, n*** has been doing awesome…”
M.I keeps repeating that Vector doesn’t help anybody. M.I. raps, “Nobody in all these years could say Vector gave them the position…”
AQ’s label, 100 Crowns now operates under the Chocolate City/Warner umbrella and is home to acts like Blaqbonez and Torna.
YSG and Vector’s Cousin 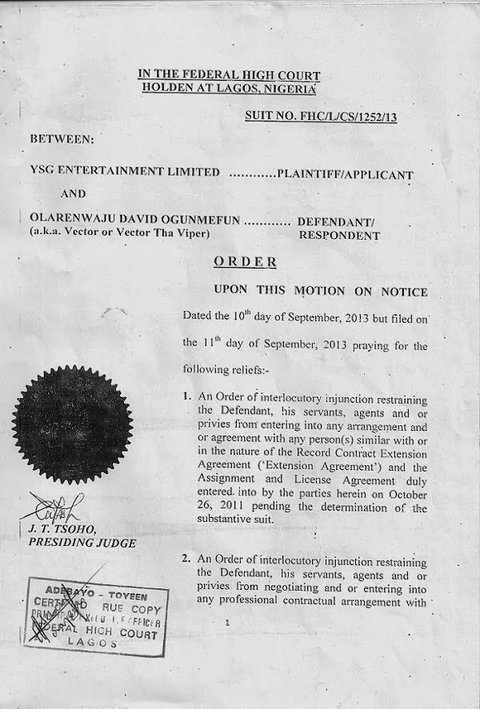 Injunction filed against Vector by YSG Entertainment. (Nigerian Films)
On September 13, 2013, Nigerian rapper, Vector’s dispute with his then-label, YSG Entertainment, under which he released his first two albums became a court dispute.
A Federal High Court in Lagos granted an injunction to restrain Vector from further breaching his then-contract with record label YSG Entertainment. This came after dispute over Vector’s willingness to see out the terms of the record contract he signed with YSG.
The order also restrained Vector from recording, releasing or distributing any song. He was also restrained from performing onstage.
While Vector has his own side of the story, M.I has claimed that Vector intentioned ‘snaked’ YSG. He raps, “You choosing denial, blaming everyone but yourself. Already fake when no one knew you and fame didn’t help. Look how you treated YSG when dem n***s really believed in you. F***king snake always biting the hand of people feeding you…”
As if that wasn’t enough, M.I also claims that Vector’s cousin who was his manager during the saga was not helped by Vector. M.I. claims this manager sat in jail with Vector after his arrest on the label issues. Finally, M.I then claims that this manager now has a job at Chocolate City.
20m, CCX drama and Hennessy cypher
“I’m willing and able, I’ll put 20 million on the table. That’s budget for you to spend and CC will float you label,” on a lighter note, M.I brags and claims that he can bet with 20 million naira. Woah.
A few weeks ago, Vector visited CCX Lounge, Victoria Island. It is owned by Chocolate City Group. The rapper came with a few friends. M.I addresses it, “You can with Chickens to my spot, but you didn’t buy chicken wings. Let your n***s fly, it’s my spot. Y’all can eat free food.”
Impressively M.I raps, “Sebi you waited for my rap, let me CC (CCX Lounge) you…”
M.I. clarifies Hennessy/Cypher situation
On these exchanges, but M.I drops his side as Vector in a hypothetical future, “One day on stage and daddy started blabbing. The reason why is when MI and I would fly together we’d sit in different cabins (Hennessy/Martell).
“When daddy saw MI’s cypher and jealousy got the best of him. MI was telling Hennessy, pay the rappers who’re rapping.
“But daddy thought it was about him and tried to send him a message. Then MI taught dad a lesson and MI made full confessions, then daddy stopped being jealous and daddy became a blessing. Daddy said “yeah, Teeto and Boogey were disrespected.” And daddy’s daddy MI said “Son, your gift is special.””
Remember just don’t be jealous cause God wants you to be a vessel. My son”
Headies diss and M.I’s top 5
The first time Vector publicly made a joke of M.I’s height was on one of the greatest Nigerian posse cuts of all time, ‘I No Send You.’ This was a year after State of Surprise dropped.
Vector’s verse coincidentally came after M.I’s on the line-up. He ended his verse with, “You cannot mess with me dude, I stay grounded like M.I…”
A few years later, Vector referred to M.I as “short man” at The Headies. Now he calls M.I, “Little man.” M.I addresses the Headies cheap shot, “You called me short man at the Headies. And I could’ve been real petty. But my head is always heavy from the crown, Choc City want in doing biz and my shares can help you feed your kids send you…”
Finally, M.I says Vector is not on his level and not even top five in Yoruba land, “You’re not even in top 5 rappers in Yoruba land. Modenine, DaGrin, Olamide, Reminisce, Falz.. Omo see the queue (CDQ)…”
Final thoughts:
The beef now stands at Vector (1) – M.I. (2). In anticipation of this, Pulse interviewed Vector on October 2, 2019. During the interview, Vector addressed some of the points M.I raises on ‘The Viper.’
The interview will be published in video on written content on October 7, 2019. This will include why M.I has now taken his version of ‘The Purge’ down from YouTube.
We also await M.I’s EP.
Related Topics:Celebrity Gist
Up Next