Obinwanne Okeke on Forbes Africa in 2016
What happened?
Sometime between the 2nd and 6th of August, 2019, the U.S Federal Bureau of Investigation (FBI) arrested the CEO of Nigerian firm Invictus Group, Obinwanne Okeke, for conspiracy to commit computer fraud and wire fraud. This was after a 13-month investigation. Read the affidavit from the FBI agent that investigated Okeke here
Why was he arrested?
Unatrac Holding Limited, which is the UK Export Sales office for Mantrac Group (itself a subsidiary of Construction and Mining equipment manufacturer Caterpillar), filed a report with the FBI in June 2018 stating they had been compromised via a phishing email that fraudulently acquired sensitive log-in details of their Chief Financial Officer (CFO). Posing as the CFO, the intruder then sent wire transfer requests to the Unatrac internal Finance team leading to several transfers amounting to $11 million (N3.9 billion).
The FBI opened their investigation in July of 2018 which led them to Mr Okeke.
What is a Phishing email?
Phishing emails are fake emails sent with the intent of fraudulently acquiring sensitive log-in information.
Who is Obinwanne Okeke?
Born on November 9th, 1987, Obinwanne Okeke was an internationally celebrated Entrepreneur and CEO of Invictus Group. The firm’s business interests include Private Equity, Oil & Gas, Agriculture, Construction, Real Estate, Energy solutions, and more. In a 2012 interview he referred to Invictus as an Entertainment company which suggests it has morphed since then. He is the 17th child of a Polygamous father who reportedly passed away when he was 16.
Champagne bath in the club
5 ways his arrest could affect Nigerian Entrepreneurs:
1.      Reduced media coverage of up-and-coming Nigerian Entrepreneurs
Okeke’s claim to fame in the business community happened after he appeared on the cover of Forbes Africa in 2016. That year he was featured on Forbes’ “30 under 30” list which profiles young, up-and-coming entrepreneurs under the age of 30. In 2018, he was featured on BBC’s “Focus on Africa” and described as an “inspiring” entrepreneur. In light of his arrest, local and international media houses might be less willing to feature up-and-coming Nigerian entrepreneurs which would limit their exposure and thus affect the reach of their potentially positive impact.

Okeke’s 2018 BBC interview
2.      Reduced invitations to impactful leadership gatherings
In 2017, Okeke was a Panelist at the Wharton Africa Business Forum. The annual forum is organized by the University of Pennsylvania’s Wharton School of Business, one of the most prestigious Business schools in the world that boasts Alumni like Billionaire Investor Warren Buffet, Technology entrepreneur Elon Musk, Google CEO Sundar Pichai, and U.S President Donald Trump. The forum brings together thought leaders to discuss ways of pushing Africa forward in innovation and other fields.
A year later, Okeke was a speaker at Yaba TEDx, in Lagos, Nigeria. TEDx is an international program of local, self-organized events that hold discussions for the purpose of spreading ideas.
The arrest of Okeke could see organizations think twice before inviting future entrepreneurial stars from Nigeria. 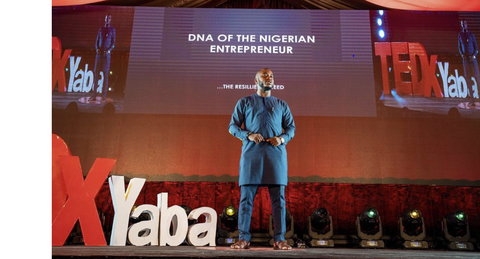 Okeke speaking at TEDx Yaba in 2018
3.      Possible delayed Visa application reviews for Nigerian travelers
With aggressive protectionist attitudes to immigrants prevalent around the world, the last thing businesses travelers from Nigeria need is another reason for extra scrutiny when applying for visas to travel overseas. Back in May, Business Insider SSA wrote about the U.S removal of interview waivers for visa renewals in Nigeria. Known as “Drop box,” the reason given by the U.S was to “provide more efficient customer service and promote legitimatetravel.”
The affidavit from the FBI agent that investigated Okeke for 13 months noted that he was in the U.S at the time and his visa was expiring on August 6th. It was therefore important for him to be arrested quickly before he left U.S jurisdiction. Looking ahead to other Nigerian entrepreneurs applying for visas for business travel, this case might lead to delays when their applications are being reviewed.
4.      Possible challenges to funding for future Nigerian Startups
Access to capital is one of the biggest obstacles facing entrepreneurs in Nigeria. The arrest of Okeke could lead to Venture Capitalists and Angel Investors avoiding promising Nigerian entrepreneurs because of reputational risk.
5.      Possible increased profiling of young Nigerian men by SARS
There have been a number of reports of young men in Nigeria’s burgeoning tech industry being unfairly profiled by the Special Anti-Robbery Squad (SARS). Because of the prevalence of internet fraud in Nigeria, young men that are casually dressed and in possession of laptops and other gadgets have attracted attention from SARS. While some of these young men could potentially be “Yahoo boys,” ( a colloquial term for internet fraudsters) Okeke’s arrest means some innocent men could also be caught up in the Government’s drive to rid the nation of this illegal activity due to the latest negative spotlight it places Nigeria under.
Curled from Pulse.ng
Related Topics:NewsTrending
Up Next