Manchester United’s late rally from 2-0 down to snatch a point in a 2-2 draw at home to Burnley on Tuesday was too little, too late for midfielder Paul Pogba. 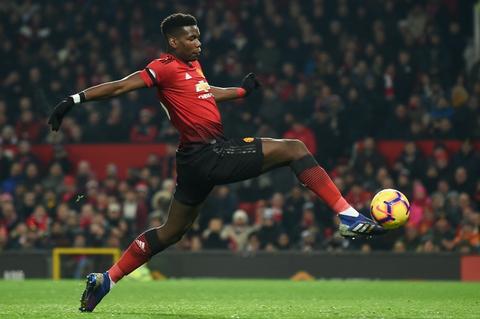 Paul Pogba scored in Manchester United’s late comeback to snatch a 2-2 draw at home to Burnley on Tuesday
Ole Gunnar Solskjaer missed out on a ninth straight win as caretaker manager despite Pogba’s penalty and a stoppage time equaliser from Victor Lindelof as United dropped two points in the race for a top-four finish after falling behind to goals from Ashley Barnes and Chris Wood at Old Trafford.
“We are disappointed with ourselves,” said World Cup winner Pogba.
“The way that we played when we conceded the second goal (is how) we should have started,” he explained.
“You have to learn from your mistakes and next time I think we need to start the game differently. That’s it.”
A two-goal fightback in the final three minutes plus injury time was reminiscent of the United of old for whom Solskjaer played under Alex Ferguson.
However, after surging back into contention for Champions League qualification, United could fall five points off the top four on Wednesday should Chelsea win at Bournemouth.
“Like the manager says, keep being humble,” added Pogba. “You have to start strong, you have to be aggressive because they were in the first-half.
“I think we played like we were winning maybe 1-0 or 2-0 and that’s why the result was like that.”